We Are Family! But It Ain't Easy! 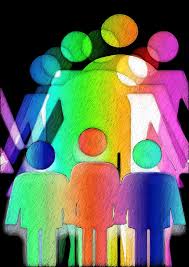 Here at Interfaithfulness we have been multiplying our channels of communication, with slightly different intentions for each means. For months now I have been weighing what the purpose of this blog should be amidst the other communications we have: our podcast, Toward a More Jewish Jesus, our semi-monthly newsletter Signals and our twice weekly live Facebook offering, Red Door Diary.  (Yes, we invite you to partake of all of these and I will tell you bow at the bottom of this posting).

But what of the blogs?  I think the blogs should be "crunchy," that is, something substantial to chew on, and often reflecting my current research, or providing backup material for issues raised in "The Red Door Diary," Signals

So with that in mind, here is a book review of something I just finished, with which I do not entirely agree, as you will see. But it sure is interesting!

Joseph Hellerman in professor of New Testament at Biola Univerity, Talbot School of

Theology and helps pastor Oceanside Christian Fellowship in El Segundo, California. And he brings us a book titled, When the Church Was a Family: Recapturing Jesus’ Vision for Authentic Christianity (Nashville: B&H Publishing), 2009.

Hellerman holds that Yeshua, established, Paul followed, and the pre-Constantian church continued a model of church socialization mirroring assumptions about family life then prevailing in the Mediterranean world. In brief, “Jesus and his followers did not define loyalty to God solely in terms of a low-group, individualistic, ‘personal relationship with Jesus.’ . . .  For the early Christians, loyalty to God found its tangible expression in unswerving loyalty to God's group, the family of surrogate siblings who called Him 'Father.'" (74).

In Chapter One, he introduces the concept that when one became a disciple of someone, it was assumed that one became a member of his group. Chapter Two explores the family in the New Testament world, in which the strongest bond of all was that among patrilineal consanguineal siblings. This bond, and the expectations and responsibilities it entailed, was stronger even than a spousal relationship.

Chapter Three, “Jesus' New Group,” develops how the priorities and responsibilities of being a part of Yeshua’s group take precedence over prior and other familial associations. Four family values predominate in Paul's groups.

Chapter Four explores how this worked out in Paul’s churches, while Chapter Five explored how it worked out in the pre-Constantinian church of the Roman world.

For Jesus, Paul, and early Church leaders throughout the Roman Empire, the preeminent model that defined the Christian Church was the strong-group Mediterranean family.

God was the Father of the community. Christians were brothers and sisters. The group came first over the aspirations and desires of the individual. Family values--ranging from intense emotional attachment to the sharing of material goods and to uncompromising family loyalty--determined the relational ethos of Christian behavior (119).

Chapter Seven, “Life Together in the Family of God,” Chapter Eight, “Decision Making in the Family of God,” and Chapter Nine, "Leadership in the Family of God,” explore the implications of this model for modern churches and how these findings and this model might be best implemented in the contemporary context. Of special note is material in Chapter Eight on how within this model, major life decisions such as place of residence and choice of a mate should be processed with the group or a subset of that group rather than being one’s “private business,” as is the current default western presupposition. And in Chapter Nine, he wisely examines how to avoid abuses in the strong-group model, chiefly through implementing a plurality of elders. In his Conclusion, he insists on the wisdom of a balance between “robust boundaries,” that is, clear standards of belief and behavior to which all group members are expected to subscribe, and “relational solidarity,” that is, the pervasive and strong mutual commitment group members share with with all others in the group.

Although Hellerman displays a diffident personality, his thesis and presentation are hard-hitting. He is calling for a radical shift away from American individualism toward the strong-group familial church model he outlines for us in the teachings and example of Jesus, Paul and the pre-Constantinian Church.  And for Hellerman, these are not simply “nice options if that’s your style.” He says, "If salvation is a community-creating event, if conversion to Christianity means being saved to community, then it would seem that for a conversion to be genuine, this relational aspect of salvation must somehow find expression in the everyday life of a professing Christian" (220).

Of course his vocabulary comes form his church context, and needs adaptation for the Jewish and Messianic Jewish worlds. Still, the book is very much worth a read, even if only to expose and challenge current assumptions. But I had some issues with and questions about what I read.

Some Issues and Questions

I found his thesis and exhortation to be unduly optimistic. One ought not argue against the advisability of a church being a family, with the members of it treating each other like honored siblings, and deferring to the group in areas which we have been taught to be solely in the private domain. But one also ought not to miss how in church life, as in family life, most families are dysfunctional, and dysfunctional church families will not produce the kinds of ideal results and relational climate he extols. Again, dysfunctionality seems to me to be more the rule than the exception in family life. Will this not also be true in worshipping congregations seen as surrogate families?

He also fails to note or comment on how strident statements in the Gospels about honoring God’s family above one’s family of origin are pitched to communities where choices on the matter will be forced due to intense opposition and societal pressures. Are these not to be seen as examples and admonitions given for times of crisis, rather than simply being alternative norms, which is how he presents them?

Finally, Hellerman's model does not map cleanly over a Jewish context because he fails to take into account the continuing and divine covenantal bond Jews have with other Jews, a bond which is not and cannot be dissolved by coming to Yeshua-faith.  To assume that is to fail to note that Yeshua’s work validates and will eventually consummate Israel’s covenantal calling, which includes a calling to be responsible to and for one another as Jews. To assume that a relationship with the ekklesia trumps this is to wrongly imagine that the ekklesia supersedes Israel rather than joining her, as Paul indicates in Ephesians two.

Nevertheless, I find Hellerman’s book useful because of the wealth of information he brings reminding us of how being Yeshua’s people, whether Jew or Gentile, makes us to be siblings to each other, accountable to and for one another under the One Father who brings us together. This is crucial for a havurah network currently forming. Being a small group meeting can only produce stunted results if we do not grow in all it means to be family together in the group, and then beyond with all other Yeshua believers, based on the foundation of our fundamental loyalty to our Jewish people.

Rather than these being competing loyalties, I prefer to see them as concentric circles, with our loyalty to the God of Israel, our Father and our King, at the center. Out of our loyalty to him, we must show proper loyalty to our families of origin, to our Jewish people, to Yeshua’s broader people, and to humankind whom Paul reminds us are all, Jew, Gentile, and even pagans,  indeed his offspring (Acts 17). This makes God the Father of us all, and in various levels and context, brothers and sisters to each other.

The implications of this model deserve further consideration, and for our context, especially against my recommendation of exploring its implications with a concentric rather than contrastive mindset.

Be sure to connect with our weekly podcast, Toward a More Jewish Jesus.You will find us on You Tube, Podbean, and on iTunes.

Also, if you are interested in finding practical wisdom for navigating the intricacies and issues where the Christian and Jewish worlds intersect, go the lower RH corner of our webpage at https://www.interfaithfulness.org/ and follow directions to sign up for Signals.

One comment on “We Are Family! But It Ain't Easy!”

Next Post
Foundations of a Viable Home Group, House Church, or Havurah - The Seven F's Foundations »