Three Questions For Those Who Seek God 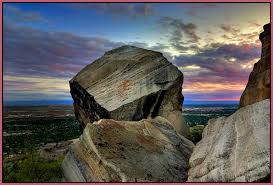 "Listen to me, you pursuers of justice, you who seek ADONAI: consider the rock from which you were cut, the quarry from which you were dug. Consider Avraham your father and Sarah, who gave birth to you; in that I called him when he was only one person, then blessed him and made him many. For ADONAI will comfort Tziyon, will comfort all her ruined places, will make her desert like 'Eden, her 'Aravah like the garden of ADONAI. Joy and gladness will be there, thanksgiving and the sound of music" (Isaiah 51:1-3).

These three verses come at the very end of the Haftarah for Shabbat Ekev. As we consider them, three questions emerge that have everything to do with the authenticity and quality of our spiritual lives––or the lack thereof.

Considering these questions will assist you in the positive introspection our tradition values at the turn of the years, which will be upon after the month of Elul, at Rosh Hashanah.

The First Question: Who Are We Listening To?

Who’s got our ear?  Who’s got our heart?  What voice, what perspective is the bottom line for each of us today? What voice are we seeking to identify and follow amidst the incessant chatter of our culture?

This is not an idle question, but one for which we will someday be obliged to give an answer. While some might assume this question is easy to answer, it is not. Let's take another look and find out why.

They have a well-defined bottom line on all matters of morality, the economy, immigration, world politics, gender-identity, Zionism. They have it all down.

But more often than not, such people are only listening to themselves and to their crowd. They live in an echo chamber where nothing new is allowed to get in—no new word, no new perspective—just ideas that confirm "what we already know.”

The problem here is that God is not a Democrat. He is not a Republican. He is not even an American. And to equate Americanism, Republicanism, Liberalism, Conservatism, or any other "ism" with the voice of God is idolatry. Doing so is no harmless blunder. Rather, such idolatry, such subsuming the perspective of God within the fashions of the day is a horrible thing, a stench in God's nostrils, and the smoke from that fire obscures rather than clarifies our vision of God.

Yeshua said of himself, “My sheep know my voice and they follow me?” Is that me? Is that you? For some it is never us. For others of us, sometimes. For many of us, “I don’t know.”

God calls us higher. He calls us to cultivate and guard a mindset in which the voice of the God of Israel, his perspective, is always the bottom line for us. He calls us to a habitual attitude of radical openness to reconsidering our own horizons due to having glimpsed his. We must crave to hear his voice. It is not enough to say we are "open to it"—we should hunger to hear his voice. and therefore earnestly seek it. Amos spoke of a time of national spiritual blight, when God would "send a famine through the land-- not a famine of food or a thirst for water, but a famine of hearing the words of the LORD" (Amos 8:11). Finding this prospect to be terrifying is a mark of spiritual vitality. Failing to be phased by the prospect of such a famine betokens the diagnosis given by Isaiah at the beginning of his book,

"The whole head is sick,
the whole heart diseased.
From the sole of the foot to the head
there is nothing healthy,
only wounds, bruises and festering sores
that haven’t been dressed or bandaged
or softened up with oil" (Isaiah 1).

Before we move on, let's consider one more word about alertness to the voice of God.

To be a new mother is to volunteer for serial exhaustion. Despite this exhaustion there is something we all stand to learn from mothers and how they sleep––or don't. The mother may be completely exhausted and often will be. She is asleep and a car alarm goes off in the neighborhood. She barely notices. A police helicopter goes over the house. She barely stirs. But let her precious baby cry out two rooms away and she is out of bed and off to the rescue.

Or picture yourself in a crowd, perhaps a ball park or a busy mall. People surround you, and the hubbub of crowd noise is an incessant drone. But what happens if someone out there calls your name? You are instantly hyper-focused, turned toward the source, looking to connect with the one calling you.

This capacity to selece a noise or voice out of an undifferentiated background is what is known as our R.A.S., our Reticular Activation System. This names how our brain is wired and habituated to focus on whatever it is that we love and that we have made important to ourselves. Without even trying, when such a cue happens in our context, we are instantly on the alert.

We need to develop the same capacity with God, through our valuation of His input in the reading of the Word, in hearing it preached and taught by gifted people, and through a practiced sensitivity to the subtle and vaired ways his Spirit nudges us. We need to value and love his subtle and transformative was of influencing us.

The Second Question: How Can We Know We Are Seekers of God?

Do our values, does our social conduct, do our political commitments reveal us to be people who seek justice as an overruling non-negotiable priority?  Or do we seek safety? Do we seek power? Do we obsess about denying power to them? Is that what it’s all about for us?

Recently, the media hovered over an election for the Marysville, Michigan City Council, where sixty-seven year old candidate Jean Cramer responded to the prospect of attracting foreign-born residents to the community by saying she wanted to "keep Marysville a white community as much as possible." Now, of course you are almost surely not the kind of separatist this woman is. But for some people establishing distance from people unlike themselves whether racially, economically, culturally, or politically is the lodestone of their lives. It should take little thought to realize that such commitments are unsuited to defining the directionality of the people of God.

As we go into the High Holy Days, the Word of the LORD makes harsh demands upon us. These demands reminds us of what it is we must seek if we would be identified as God-seekers:

"He has told you, humanity, what is good,
and what Adonai is seeking from you:
Only to practice justice, to love mercy,[
and to walk humbly with your God" (Micah 6:8).

If you want to make sure you are a person who seeks God, then answer the question: Do you seek justice, love mercy and walk humbly with your God? To the extent these things matter to you, then you are a God-seeker. And to the extent that these things seem inconvenient, secondary, unrealistic or unimportant to you, you are not, no matter how religious you are.

The Third Question: How Big Are Our Expectations?

Our text reminds us of this:

Consider Avraham your father and Sarah, who gave birth to you; in that I called him when he was only one person, then blessed him and made him many. For ADONAI will comfort Tziyon, will comfort all her ruined places, will make her desert like 'Eden, her 'Aravah like the garden of ADONAI. Joy and gladness will be there, thanksgiving and the sound of music.

Abraham and Sarah are the rock from which we Jews where hewn—we are connected to them. And all whom the God of Israel calls into his spiritual family are children of Abraham by faith––connected by God's mercy to Abraham and Sarah.

We are enfolded in their covenantal promises

We are part of their spiritual family

And as God was with them, he will be with us

Do we believe this?

Remember they started with nothing. They were respectively ninety and one hundred years old when their first child was born

They followed the voice of the Good Shepherd to a land they did not even know, and in the process, Abraham became a very rich man, with an entourage of hundreds of people. When his nephew Lot was captured in an act of war, Abraham went out to rescue him with 318 trained men born in his household. These were not his descendants, but rather his entourage, his posse. This was a powerful man. Think of him as God's sheik!

This is the man to whom God promised that his descendants would be like the stars of heaven and like the sand on the seashore.

What is the size of our expectations? Do we believe that we have a God that big, who can do in and through our lives things as great as these?

Returning to our original Isaiah context (51:1-3), we should remember that this word comes at a difficult time for Judah, a time of anticipated exile, judgement and defeat, ADONAI’s promise to Judah is total. He connects it with his track record with Abraham and Sarah.

Just as God took Abraham and Sarah from nothing to extraordinary blessing, and just as he remains the same God today, so in the future he will reverse Judah’s fortunes, to a time of blessing and fruitfulness, a time of thanksgiving and the sound of music. And so he will do for us as well.

Listen for God's voice. Seek it. Seek him. And find more blessing than you can contain.

For ADONAI will comfort Tziyon, will comfort all her ruined places, will make her desert like 'Eden, her 'Aravah like the garden of ADONAI. Joy and gladness will be there, thanksgiving and the sound of music.

5 comments on “Three Questions For Those Who Seek God”

Next Post
E Pluribus Unum, The Torah, and Reuniting the U.S.A. »