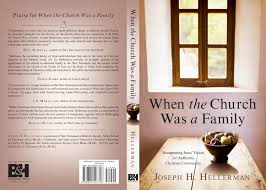 Chapter Five of When the Church Was a Family, “The Church in the Roman World,” notes the high bar of commitment expected of church members, including leaving professions regarded as immoral or corrupt. Churches would routinely see to the financial maintenance, care, and feeding of those obliged to make such choices because of familial solidarity. Hellerman contrasts this with the modern individualistic church where “we bend over backward . .  to accommodate the radical individualism of people who come to us to find a ‘personal’ Savior who, we assure them, will meet their every felt need” (104). Using contemporaneous reports from both Christians and pagans, Hellerman persuades that the driving force behind early church growth was the quality of relationship, love, and care the church demonstrated not only among its members but also toward pagans. Those in the church who were well to do exhibited their radical commitment not by impoverishing themselves, but rather through their generosity toward the poor. The church’s powerful testimony of compassionate concern penetrated and dismantled paganism despite the latter’s initial contempt of Christians and their ways.

Also, in evidence, a radical commitment to the Messiah and his people which supplanted commitment to pagan families. This is hard for us to read, but in a culture where the government made Yeshua-faith commitment a capital offense, this hard boundary was absolutely necessary because when one was in line to be martyred, the pressure was strong and unrelenting from one’s pagan family to simply acknowledge the gods of Rome and therefore live. The choice had to be made. And it was. The chapter includes an assortment of stirring illustrations. All demonstrate the high group familial commitment characteristic of the church in the Roman world.

For illustrations of what is said here, see our YouTube video on this chapter, to be found HERE.