Is Liturgy a Remedy For The Ills of Audience Spirituality? Yes and No 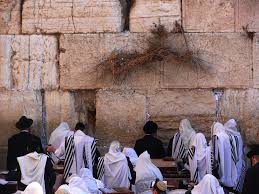 Two of my respondents to my discussion of Audience Spirituality, which we also term Spectator Spirituality, have commented on how liturgical worship makes people into participants, rather than mere observing spectators. I join my friends Cristo and Cathy in their respect for liturgy and its great value. In liturgical prayer everyone has an opportunity for intelligent, coordinated personal and communal participation. For me too, it is a wellspring of life. But it ain't necessarily so. Not by a long shot.

Let's look at that.

What is Liturgy and How Should it be Done?

The etymology of the Greek word leiturgia indicates that the "liturgy" is the worshipful service the people render in the presence of God, just as did the priests and Levites in the Holy Temple. It is the lay-energy--the work of the people. Keeping the priests and Levites in mind, there was no time in their lives when priests and Levites were more attentive to what they were doing than when their time of service in the Temple came up. This was above all no time for spacing out, not only because you might miss something, but also because such carelessness could be fatal when laboring so close to the manifest Presence of the King of Kings. Perhaps you will remember the story of Uzzah, a Levite who got careless with his duties, touched the ark of God which he should not have touched, and did not survive to tell the story. Again, following the pattern of the priests and Levites, the liturgy is no time to space out. Instead, it should call for our most intense attentiveness.

But is that we find in our own services when liturgy is being read?  I don't think so! In many Messianic congregations liturgy is minimized, reduced to the recitation of the Shema and a couple of b'rachot along the way. And for many congregations, a division is made between "the worship," songs and dancing, and the "liturgy." which is in almost every case a half-hearted bow to a tradition which is being "honored" with a tip of the hat (!!) but not really implemented or rightly understood.  A reading of the Book of Malachi should serve as a stiff warning about being ho-hum in our liturgical practice. Read it and you will see for yourself!

Some will protest that they do not understand the Hebrew of the liturgy, and that this is why it is kept to a minimum and receives less than avid attention. Understood. That is why, more than 25 years ago, I began teaching Dauermann's Principle of Liturgical Renewal, which states, "The better people understand the liturgy, the better they'll like it. Therefore, there must be an ongoing program to increase liturgical literacy, beginning with the leaders and opinion leaders of congregations."

Liturgical renewal will also mean that learning must begin at the top: with the opinion leaders and clergy of the congregation. That is because of another principle I began teaching 25 yars ago, the Principle of Obstructive Leadership which states, "The greatest obstacles to liturgical renewal are the ignorance, fear, pride, prejudice and negative experiences of leaders and opinion leaders." And all of God's people said, "Ouch."

When Liturgy Makes No Sense

In another discussion, other than concerning liturgy, Paul cautioned,

If even lifeless instruments, such as the flute or the harp, do not give distinct notes, how will anyone know what is played? And if the bugle gives an indistinct sound, who will get ready for battle? So with yourselves, if with your tongue you utter speech that is not intelligible, how will anyone know what is said? For you will be speaking into the air. (1 Corinthians 14:6-10 ESV)

This applies to many, nearly all Messianic Congregations. In too many congregations people are saying words they don't understand which apply to someone else and calling that liturgy. It is not. It is actually just a lot of religious noise, what Paul called  elswhere, "a resounding gong or a clanging cymbal." There are many fine Gentile people in Messianic Congregations saying prayers that are particular to the Jewish historical experience and covenantal identity. And it is an exercise in confusion or meaninglessness when largely gentile Messianic Congregations say these prayers.

Here's a simple example. The blessing over the Torah blesses the One who gave us the Torah, saying, "asher natan lanu et Torato--who has given us his Torah."  Now we all know that it was God who gave the Torah. so we are blessing him. But to whom was the Torah given? The Apostle Paul answers that question saying in Romans 3, "Then what advantage has the Jew? Or what is the value of circumcision? Much in every way. To begin with, the Jews were entrusted with the oracles of God," and then in Romans 9, "They are Israelites, and to them belong the adoption, the glory, the covenants, the giving of the law, the worship, and the promises." Paul would entirely understand and agree with Jews praying this Torah blessing. But he would be confused at best by Gentiles praying it--a blessing that does not apply to them in a language they do not understand.

Now many will say, "But the Gentiles have been grafted in!"  Granted! But Paul takes pains to say that Jews remain natural branches, and gentiles, wild olive branches, even after having been grafted in. The Gentiles are now children of Abraham. But Paul didn't want us to be confused: they are not Jews.

Am I speaking against Gentiles here? Of course not!  But I am speaking against confusion, and there is much theological confusion afoot in the Messianic Jewish movement when care is not taken to protect biblical distinctions. And the result is not leiturgia. It is not the service that the people offer to God. It is, sad to say, confusion.

But do not get me wrong. I LOVE liturgy when it is rightly used, just as I love a violin when it is played with a bow, rather than, say, having someone blowing into it!

Liturgy: A Magnificent Tool of the Spirit, When Rightly Used

One more point about liturgy. Many people are prejudiced against it. There are some people who imagine that such formalism is stifling to the activity of the Spirit. I would point these people to 2 Chronicles 5, and the description of the dedication of Solomon's Temple. This was the most formal event imaginable, filled with pomp, incense, priests, Levites--a heavily scripted event. But it is in response to such pomp that the Spirit of God comes in remarkable manifestation and power.

Then the priests brought the ark of the covenant of the Lordto its place, in the inner sanctuary of the house, in the Most Holy Place, underneath the wings of the cherubim. 8 The cherubim spread out their wings over the place of the ark, so that the cherubim made a covering above the ark and its poles. 9 And the poles were so long that the ends of the poles were seen gfrom the Holy Place before the inner sanctuary, but they could not be seen from outside. And they are1 there to this day.10 There was nothing in the ark except the two tablets hthat Moses put there at Horeb, where the Lord made a covenant with the people of Israel, when they came out of Egypt. 11 And when the priests came out of the Holy Place (for all the priests who were present had consecrated themselves, without regard to their divisions, 12 and all the Levitical singers, Asaph, Heman, and Jeduthun, their sons and kinsmen, arrayed in fine linen, with cymbals, harps, and lyres, stood east of the altar with 120 priests who were trumpeters; 13 and it was the duty of the trumpeters and singers to make themselves heard in unison in praise and thanksgiving to the Lord), and when the song was raised, owith trumpets and cymbals and other musical instruments, in praise to the Lord,

for his steadfast love endures forever,”

In Conclusion . . . and In Continuatiion

I have given you much to think about, discuss, and likely, disagree with here. Fine. Liturgy, rightly used, learned, and appreciated  is a holy thing, something ancient yet new, something old yet incredibly alive. I love good liturgy and liturgical prayer. The apostles did too. We read in  Acts 2:42, "And they devoted themselves to the apostles’ teaching and the fellowship, to the breaking of bread and the prayers."  These were "the prayers" of the Jewish people. Yeshua told his disciples in their prayer life, "And whenever you stand praying, forgive, if you have anything against anyone, so that your Father also who is in heaven may forgive you your trespasses" (Mark 11:25). They were standing in prayer, as were the Publican and the Pharisee in his parable (Luke 18:9-14), because for Yeshua, the Amidah, the traditional Jewish standing prayer, was normal. He did not have the hangups with liturgy that so many Messianic Jews have inherited. He and the apostles valued the connection with the previous generations of praying Israel. And he did not find rabbinic prayers contaminated because of their origins, as do many semi-informed and ill-informed Messianic believers.  What a gulf exists between His world, which was also the apostles' world,  and ours. Sad.

If I were more of an optimist, I would expect that a blog like this will engender needed change in the Messianic Movement. But I think not. Still, this needed to be said.

In my next blog I will begin talking about something else that is desperately needed if the wind of the Spirit would have His way in us and through us.

12 comments on “Is Liturgy a Remedy For The Ills of Audience Spirituality? Yes and No”

Next Post
Turning the World Upside Down Again: It All Begins at Home »