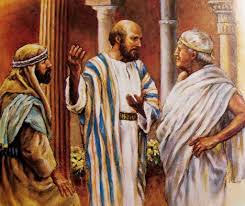 Today we continue our serialized review of Amy-Jill Levine's The Misunderstood Jew: The Church and the Scandal of the Jewish Jesus. Dr. Levine is an Orthodox Jew who teaches New Testament Theology at the Vanderbilt University Divinity School. Today's we begin examining her second chapter,  “From Jewish Sect to Gentile Church,” and we will continue that examination next time as well.

Dr. Levine opens the chapter discussing the disruptiveness in its earliest days of this new phenomenon of Yeshua-followers in the midst of Israel. Its very character is at odds with and threatening to the status quo, for example in how it calls for an allegiance which disrupts axiomatic family structures. Jesus’ teachings about not having come to bring peace but a sword, setting a man against his father, and daughter against her mother and a daughter in law against her mother in law, with one’s foes being of one’s own household (Mathew 10), are therefore no mere hyperbole or prediction for some far off conflict at the end of the age. With Jesus, the end of the age has come, and with his coming, conflict.

Touching on a theme she develops brilliantly later in the chapter, she also points out how the new Jesus movement endangered the Jewish community and its relationship with the Romans.

To proclaim the resurrection of an individual is one thing; to proclaim that the Messiah was a man crucified by Rome was something else entirely. There was, according to Rome, only one king, and that was Caesar, not some Galilean criminal with royal pretensions. The temple establishment may have feared a public revolt; scribes and teachers of the law might have worried about this rival school of thought. The followers of Jesus may have contributed to the tension by preaching about the end of the age, the destruction of the temple, the guilt of all the people for crucifying Jesus, or Jesus’ place in the heavenly throne room (55).

Levine then turns to the issue of messianic expectations. Like Orthodox Jewish New Testament scholar Pinchas Lapide, she allows that Jesus may have been resurrected, but this was not a singular event. There had been other raisings from the dead on the Older Testament. But Messiah? No!  For Levine, Yeshua just doesn’t fit the picture.

The coming of the Messiah meant that there would be a manifest difference in the world. . . . It was the time of proclaiming “release to the captives, and recovery of sight to the blind” (Luke 4:18). . . not just some captives, but all; not just some who are blind, but all. Even more marvelous, the messianic age would witness a general resurrection of the dead. . . . (59)

She holds that Yeshua’s blanket failure to live up to these expectations, together with how his message tore the societal fabric, made his Messianic claims a hard sell. With this as her premise, I started raising my eyebrows and scribbling more than usual in my margins at her read on how Yeshua’s earliest disciples allegedly had to improvise and reinvent the message when the anticipated end of all things failed to show up on the schedule they expected.

She checks off the list of apostolic writers, and “traces” their alleged recrafting of the party line, so that “John’s Gospel shifts away from them and from and end-time view of the resurrection: eternal life, according to the fourth Gospel, means living fully, today, and the abiding presence of God.”  She also holds that in Matthew 27:51-53 the apostle reconfigured the doctrine of the general resurrection of all the dead into a rather local and paltry consolation prize. No, the dead small and great have not been raised from the dead, but there is that story Matthew tells of some graves having opened and previously deceased holy people seen walking the streets of Jerusalem at the time of Jesus’ resurrection. Yes, that must be it!  Or is it? Levine says it is. I say, meh.

Dr. Levine insists that in view the failure of the general resurrection to occur as quickly as they expected, there were four areas where Jesus’s disciples had to “punt.”

She summarizes her assessment:

Among others, it would be Peter, Paul, and James who provided answers to these questions, and as they did, they transformed the Jewish sect into a gentile phenomenon.   They created a movement in continuity with the Jewish message Jesus proclaimed, but they also adapted the message — along with the announcement of Jesus's crucifixion and proclamation of his resurrection — to new times, settings, and congregations (62).

Understanding what that would mean will require of us a long look at the apostle Paul, the churches he founded, conflicts in the early church, and tensions still being felt today over Jews and Gentiles, and the pros and cons of Torah observance for each of them.

That investigation awaits our next blog later this week. Come back to be stimulated a lot, and likely, a little disturbed.