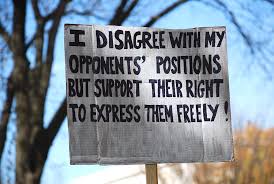 Recently I did what I do every Wednesday night: I taught a Bible Study, this one, on passages from Luke 7-10. This morning as I woke up, I realized that not only do two of those passage have interesting applications to how we regard and treat those with whom we differ, they also have direct application to how we relate to each other in these days of political turmoil.

Here are the two passages. My intention is to promote new introspection and respectful disagreement.

(1) 9:49 (The Apostle Yochanan said to Yeshua) “Rabbi, we saw someone expelling demons in your name; and we stopped him because he doesn’t follow you along with us.” 50 Yeshua said to him, “Don’t stop such people, because whoever isn’t against you is for you.” . . .

(2) 9:51 As the time approached for him to be taken up into heaven, he made his decision to set out for Yerushalayim. 52 He sent messengers ahead of him, who went and entered a village in Shomron to make preparations for him. 53 However, the people there would not let him stay, because his destination was Yerushalayim. 54 When the talmidim Ya‘akov and Yochanan saw this, they said, “Sir, do you want us to call down fire from heaven to destroy them?” 55 But he turned and rebuked them.[ 56 And they went on to another village.

In the first passage we see the apostles encountering people whose work is related to their own, but who are in some manner different. These folks are not part of their crowd. This makes the apostles nervous.

Yeshua's advice is something we would do well to heed in our own day: “Don’t stop such people, because whoever isn’t against you is for you.”

So assuming Yeshua would have the temerity to meddle in our social and political affairs, think of these questions.

The second passage concerns dealing with a people group you consider to be your opponents and who treat you and yours inhospitably . Perhaps the GLBTQ crowd, perhaps Democrats, perhaps Tea Party Republicans, perhaps Antifa, perhaps Muslims. Whichever group upon which you and your crowd would like to call down fire from heaven to destroy them.

In the parable, Yeshua rebukes the disciples for this intention.

If you prefer less complex questions and simpler answers, I have some TV channels and news sources I can point you to . . . But sometimes, isn't it better to struggle?

2 comments on “Yeshua Gets Political”

Previous Post
« A (Belated) Fourth of FIve Questions for Pesach – Question (What About Torah Observance?)

Next Post
Three Questions For Those Who Seek God »