Son of God Doesn't Mean What You Think It Means! 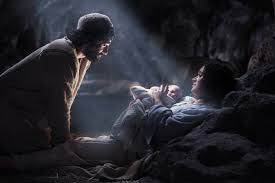 O. K. It’s Christmas time. If there’s ever a time of the year when people talk about Yeshua, that’s Jesus, and the idea of his being the Son of God, now's the time. But most of what people will say this season and every season about Jesus being the Son of God will be wrong.  How do I know? The Rabbi told me.

In this case, the Rabbi is Daniel Boyarin.We have been talking about his fantastic book, The Jewish Gospels: The Story of the Jewish Christ, where false assumptions keep falling like maple leaves in Connecticut  autumn. And one the ideas Boyarin shoots down is the way we think about Jesus being the Son of God.  Check around, and most people you meet will connect Jesus being the Son of God with the Virgin Birth. But that is not the reason the Bible attaches the name "Son of God" to Jesus. In fact, hold your hot toddies folks,  the term “Son of God” is an Old Testament term that also pops up in the New, and it was applied to Judah's kings, descendants of King David. When these kings ascended their throne, they were regarded as having become the Son of God.  Boyarin makes this point, looking at the Second Psalm. Here is what he says:

Kings of the earth set themselves up, and rulers conspire together against YHVH and against his anointed one [his Mashiach]. . . . "I have installed my king on Zion, my holy hill." I will recount the decree of YHVH: He said to me, "You are my son; this day I have begotten you.' (Psalms 2:2, 6-7)

The anointed, earthly king of Israel is adopted by God as his son; the son of God is thus the reigning, living king of Israel. "This day I have begotten you" means this day you have been enthroned.

If we look carefully, we can even see this connection of the title Son of God with the Davidic Kings when the angel tells Mary that she is to be the mother of the Messiah. Just look at what he says in Luke chapter 3:

And the angel said to her, “Do not be afraid, Mary, for you have found favor with God. 31 And behold, you will conceive in your womb and bear a son, and you shall call his name Jesus. 32 He will be great and will be called the Son of the Most High. And the Lord God will give to him the throne of his father David, 33 and he will reign over the house of Jacob forever, and of his kingdom there will be no end.”

35 And the angel answered her, “The Holy Spirit will come upon you, and the power of the Most High will overshadow you; therefore the child to be born will be called holy—the Son of God.

We've got two references to the Messiah being the Son of God here. In the first, the angel clearly connects the title "Son of the Most High" with Yeshua's destiny to rule on the throne of his ancestor David, and to reign over the house of Jacob forever, with an everlasting Kingdom.  The Son of God title is a kingly title, in this case of a very special King! The second reference is that because this child will be born through the activity of the Holy Spirit, he himself will be called holy, the Son of God. So here Luke does bring in a secondary application of the term, Son of God. Yet, we must remember that the primary reality being pointed to is not the divine nature of this child, but his identity as the newborn King of Israel, whose will therefore be called the Son of God in connection with his divine enthronement as Israel's King. [Many Bible scholars connect that with the resurrection and ascension of the risen Messiah!] Only secondarily does Luke draw the lesson that he will be called the Son of God due to his divine origins.

You will wonder I suppose if I am suggesting that we abandon the idea of the Deity of the Messiah. Never!  But the surprise is that the Bible makes this point, that the Messiah is more than just a man, not with the title "Son of God" but, paradoxically, with the title Son of Man. And that little morsel comes not from the New Testament, but the Old. But explaining how that could be will have to wait for our next blog.

*And a little reminder. Rabbi Dr. Daniel Boyarin, whose excellent book we are examining lately, is not a believer in Yeshua/Jesus as Messiah. Don't anyone reading these blogs imagine that we are stating or insinuating otherwise.  He is just a very fair and provocative world class Jewish scholar.

7 comments on “Son of God Doesn't Mean What You Think It Means!”

Previous Post
« Boundaries: Can They Change and Be Renegotiated?