On Being a Wet Jew, Or Not: A Call for Clarity on the Question of Immersion 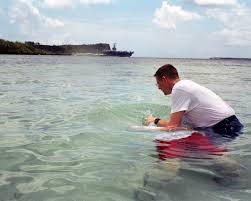 I recently had an on-line disagreement with an old friend, a great guy who is a Jew who believes in Yeshua.  He was saying that immersion-baptism is a great thing and it doesn't make a Jew any less a Jew. I countered that this is only the case if and when those involved are not treating the rite as a bonding with another community meant to replace the Jewish community as that Jewish person's community of reference.  A community of reference is

The social group or category to which the individual ‘refers,’ consciously or unconsciously, in the shaping of his attitudes and beliefs on a given subject or in the formation of his conduct. It is the social entity toward which he orients his aspirations, judgments, tastes or even at times his profoundest moral or social values (Nisbett, Robert, and Robert A. Perrin, The Social Bond, 2nd ed.  New York: Alfred A. Knopf, 1977), 100.

This being the case, it is hard to overstate the influence one’s selection of a community of reference has upon the shape of one’s life and identity. A person who changes his/her community of reference is already in the process of becoming a different kind of person. He or she consciously or unconsciously seeks to fit in with and win the approval of such a community, avoiding its censure, imitating its iconic figures, shaping thought, values and action around this model of all that is deemed commendable and desirable.  This has great implications for identity formation in the Messianic Jewish context.

Choosing a community of reference is nothing less than deciding who you are becoming, and therefore who you are, and who you are in the process of ceasing to be.

Immersion is not simply a personal rite: it is a communal rite. And to the degree that in the understanding of those participating it involves explicitly or implicitly leaving the Jewish community behind and bonding with another community instead, what does it mean exactly that the now wet person is still as much a Jew as when he or she went into the water?   Is it legitimate for my friend to treat bringing Jews to believe in Yeshua as a moral imperative, but to treat the issue of those Jews living Jewish lives in Jewish community thereafter as purely a matter of personal choice?

I am not against immersion. But I am against foggy understandings of what is happening. I can surely be pardoned for saying that a clear understanding of what is intended in the rite, and what is not intended in the rite is crucial to the endeavor. To the degree that one is saying or even implying that henceforth the person will be this instead of that or bonded with this community instead of that one, the issue of immersion, and of becoming a Jew who embraces Yeshua as Messiah, and of the involved shift in one's relationship with Jewish life and community  is a very serious one indeed. In such cases, it pays to call for clarity.

That the Messianic Jewish world has learned to cut itself off from allegiance to the ways and worldview of our ancestors is partly due to a tradition of contempt, whereby many in the church have long viewed and taught Judaism to be little more than a launch pad for God’s better alternative, the church. From the second century onward, the church learned to commend itself to the pagan world by discommending the Jews and their religion. A visit to most seminary classes in Pauline theology will demonstrate how the weight of Christian teaching and rhetoric portrays the commandments of Torah, and thus, the Jewish way of life, as burdensome and expired, and with its alleged death, Judaism is left a vestigial religion and the Jewish community left to inherit for itself the language Paul applied to the pagans of his day: “strangers to the covenants of promise, having no hope and without God in the world.” “But be of good cheer,” says the church. “We are the new Israel, so come and join us. Come and assimilate, forget who you were and become one of us.” This is the sad legacy this tradition of contempt has bequeathed to the sons and daughters of a Judaism viewed as a discarded Plan A while Jewish believers in Yeshua are invited and expected to come closer to God by forsaking their people and heritage. Yes, it is that bad, if not always and everywhere, certainly often.

Surely, not all Christians harbor such attitudes. That should be obvious. But that there are exceptions only goes to prove that there is a rule, and the rule is that Judaism and Jewish ritual life are regarded as a preliminary stage in God’s plans for the world. Although Jews and Jewish life may be treated with courtesy, in truth, Jews and Judaism need to get over themselves. Or so we’ve been told.

My friend with whom I had the disagreement asked me if we ought not to leave the issue of the person's bonding with the Jewish community and Jewish life to be a matter of personal preference. I responded then and do respond now with a resounding "No."

When Saul of Tarsus was taking his leave of the Ephesian elders, he reminded them of this, "I testify to you this day that I am innocent of the blood of all, for I did not shrink from declaring to you the whole counsel of God" (Acts 20:26-27 ESV). Had these elders been Jews, do we imagine that he would NOT have considered their allegiance to the Jewish way of life and to solidarity with the Jewish community to be part of "the whole counsel of God?"

That is the crux of the dispute between my friend and I. Are we to leave allegiance to Jewish life and Jewish community as a gray area, where Jews can opt in or opt out however they so choose, while still claiming Jewish identity?

This doesn't sit right with me at all. I don't imagine it would have sat right with Saul of Tarsus.

2 comments on “On Being a Wet Jew, Or Not: A Call for Clarity on the Question of Immersion”

Previous Post
« Turning the World Upside Down Again: It All Begins at Home