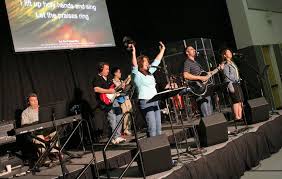 Last post I mentioned  "spectator religion" or "audience spirituality" which has become the default modality for many in the Jewish, Christian, and Messianic Jewish worlds. Especially in the Christian and Messianic Jewish worlds, but not theirs alone, congregations now have their "worship teams," which are really bands.  The worship area is now a stage. the worship team is turned toward the congregation which is now the audience, and people judge whether a given house of worship is worthy of their attendance in part on the quality of "the worship" which is actually the quality of the experience the band catalyzes. In many contexts, the distinction between worship leaders and entertainers has effectively disappeared. Did you notice?

For Christians and most Messianic Jews/Gentiles, in large measure this is a by-product of what is called "the Jesus Revolution," a religious revival in the late 1960's and early 1970's, The youth culture at that time was all about Sex, Drugs, and Rock and Roll. The Jesus revolution domesticated sex, bringing it back into spousal relationships, eliminated drugs offering the alternative of the Holy Spirit, and sanctified Rock and Roll by toning it down a bit, changing the words, and bringing it to church every week. But along with the music came the ethos. If a worship team is now a band, then the platform is a stage, and the congregation is an audience. Go ahead. Say it isn't so.

These factors combine with another: the numbers of people in our worshipping congregations, which need to be large in order to pay the bills. All of this creates a problem.

In talking to a friend who is a social worker recently I asked her if there was any difference in doing group therapy with a group of, say, eight people, in contrast to a group of eighteen people. Her response was immediate: yes, there is a difference in the possibilities of participation and engagement of those in attendance. If you are one of eighteen in the room, the chances of you being fully engaged, your voice being heard, your opinions considered and weighed, your personal giftedness manifest are sharply reduced. In an eight-member group, in the words of John Wimber, of blessed memory, everybody gets to play. But what about a group of 18, or 28, 38, 208, or 2008? Almost no one in such crowds will get to do anything but respond and enjoy. But is this the way it's supposed to be? Not if the Bible means much by what it says!

Marshall McLuhan taught us that the meaning is the message, showing how the modality of communication shapes the content and impact of that communication. I am saying this:

In a worship context, the structure is the spirituality.

When you position congregants as an audience, they become responders, or in many cases, non-responders. But very few are actors. And it is only in action as part of a communal context that our gifts are actualized, discovered, and take effect. Apart from this, neither we nor the Kingdom of God will grow very much.  In other words, couch potatoes seldom grow and propagate.

There is a solution. But to appreciate it and give it due consideration, we will first need to go a bit deeper into the problems to be solved.

Next posting I will talk about something which is meant to increase worshipper participation and engagement--liturgy. Friend? or Foe? Both, actually, depending . . . . Next time I will tell you why.

5 comments on “MORE About Audience Spirituality”

Next Post
Is Liturgy a Remedy For The Ills of Audience Spirituality? Yes and No »